Edit
watch 01:36
We're Getting Mutants in the MCU - The Loop
Do you like this video?
Play Sound

“I know that for a fact!”
―Lily's catchphrase 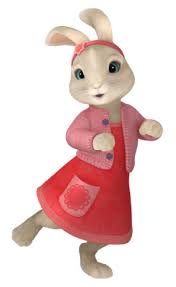 Lily Bobtail is one of the three main protagonists in the Peter Rabbit (TV Series). She is Peter Rabbit and Benjamin Bunny's quick-witted best friend and travel companion. Lily always carries many useful objects in her 'Just In Case' pocket on her dress, she has a ladybug named "Florence" and always claims to know a thing or two "for a fact". Unlike Peter and Benjamin who were originally created by Beatrix Potter, Lily is a newcomer who was created by the production team for the series.

An only child, she is the daughter Of Dr. Bobtail and Mrs. Bobtail, who recently moved to the Lake District. In the US version Lily is voiced by Michaela Dean and Harriet Perring in the UK, however in Season 2 Poppy Labrosse took over the role in the UK Version. In the Japanese dub, Lily is voiced by Iori Nomizu.

Lily is the most clever Rabbit in the whole show. This practical, quirky bunny is most at home following her passion for reading and finding stuff out. She mostly says in her life "I know that for a fact." Her unquenchable thirst for knowledge and an innate curiosity leads her to be more methodical, cautious, and logical in her approach to adventures than the impulsive Peter. Her logical approach and patient attention to detail can help her friends see something vital others might have missed. She always keeps an eye on Florence - her Ladybug.

Lily's personality is nothing short of a book smart scientist, nerd, and detective. She is the intellectual brains of the group who solves to learn and is logical. This is supported by the fact that she sticks to science, evidence and facts from books rather than use her senses impulsively and rashly like Peter, who despite being adventurous, selfless, and brave like her, is a street smart but mischievous rascal.

Lily also has a cool-headed detective mind, as she uses her magnifying glass closely and carefully looking for and examining clues while going exploring and detective hunting having a much more scientific approach. She rants and rambles about scientific facts, much to the annoyance and boredom of Peter in addition to ranting about previous events (such as being chased by Mr. Tod) to other protagonists. She also knows certain tips and tricks by the book to liberate from danger. For example, she knows how to unlock locks (especially old rusty steel padlocks) with her hairpin (a bobby pin), tie and untie knots, and more.

In addition to being book smart and scientific, Lily is also very sweet, friendly, gentle, kind, welcoming, well-mannered, compassionate, and beautiful. She's truly a great friend who cares about Peter and Benjamin and gets along with them very well.

She is very adventurous, brave, kind, caring and loyal just like Peter but pays attention to details that others miss, and is always prepared for whatever is to come her way using things in her "just in case pocket". In the first episode, Lily said that she has a photographic memory, which has also helped the three on adventures.

Lily is a light gray, and white rabbit with blue eyes, and is always wearing a red dress with some pink that has her "Just in case pocket" which is pink with a red flower on it. She has a pink sweater with purple flower-shaped-buttons on the right side and over the dress. She has a pale red headband over the head with a pink flower on it.

Parents: Lily has a great relationship with her parents, but they seem to worry a lot about their daughter due to the dangers in her adventures with her friends.

Peter and Lily most likely seem to be best friends and get along well, and have a potentially strong relationship. Throughout the series, their relationship can be described as two friends who have a strong friendship. Peter is always looking out for Lily, stands up for her, and vice versa. Peter also seems very protective of Lily and the two of them care for each other very well when they spend time together excluding Benjamin. They also pull off a series of selfless and heroic rescue stunts, saving both each other and others who are also in danger.

On a few occasions they competitively rival to outwit against one another and prove who is smarter and better, but in the end, they bury the hatchet and realize their friendship is more important by accepting that they are smart in their own ways. They are also seen trying to protect one other when they go on adventures. It is heavily implied that they deep down secretly like each other, such as pulling off selfless heroic sacrifices and rescues during crucial dangers, consoling one another during upsetting and dreadful miseries (by complimenting and motivating each other), in addition to standing up for one another during encounters with the predators. During their first meeting, Lily and Peter got off on the wrong foot. Following Lily's criticism, he received Lily's heartwarming sympathy and other friendly remarks and learned to reciprocate her friendship. Before long he also learned to reciprocate her friendship. Peter mistakenly simply never knew how to get along in the first place. On several occasions, there are occasional good conversations between them in addition to them regularly hanging out. She does seem to have a crush on him.

Just like Peter, Lily is best friends with Benjamin, but he liked her from the beginning, even though Peter didn't.

Lily is good friends with Cotton-Tail and the two are very close to each other. Whenever Cotton-Tail follows her big brother and his friends on an adventure, Lily will look after her and make sure she stays safe and doesn't get in trouble. Since Lily doesn't have any brothers or sisters, she sees Cotton-Tail as a little sister.

Community content is available under CC-BY-SA unless otherwise noted.
Advertisement